Crow (クロウ) is a mischievous lad Seto initially meets at the Lunar Hill Fun Land amusement park. Although in search of other survivors and human interaction, Seto gets more than he bargained for, and soon ends up chasing after Crow for his antics.

Crow is an advanced robot who was built by an unknown scientist. He somehow lost his memory, presumably following the Glass Cage Project. Since then, he has been living a carefree existence, wandering from place to place in search of clues to his past.

Crow is initially rude to Seto, questioning him harshly, stealing his locket, and teasing him. Crow continues his jest by making the boy run around the theme park after him, even having Seto fall in a hole and face the Tracker.

Having no memory of his past, Crow bases his personality on books he has read. The most notable is "Pirate Isle", which can be found as the story progresses. Like the pirate character in the book, Crow takes on a haughty tone and revels in his mischief.

Crow eventually ends his hijinks and acts friendlier with Seto. Together they talk about what they are searching for, and declare themselves best of friends.

Crow appears to look like a teenage boy with jet-black hair, sharp teeth, and green eyes with narrow pupils (much like a cat's eye). He wears oddly-styled clothes based on black, purple, and yellow colors. He hangs a kettle by his side as well a crow's head on his chest. His outfit contains other crow-related items, like black feathers, and items seemingly found in his travels.

Seto meets Crow after heading out of the underground mall and into the Lunar Hill Fun Land amusement park. Crow steals the locket from Seto's grandfather, where he keeps his precious mementos. Crow runs off with it, teasing Seto by making him chase after him, mocking him along the way. After losing him at the Merry-go-round, teacups, and roller coaster, Seto finally catches up to Crow, only to tumble down into a pitfall trap.

Now trapped under the amusement park, Seto makes his way back to confront Crow. While making his way through discarded park equipment, he finds a book called "Pirate Isle", and notices that Crow has spoken lines directly from the book. Back on the surface Crow is waiting atop the ferris wheel, however, before reaching him Seto must fight a Tracker that suddenly appears. After fending off the Tracker, Seto makes his way up the ferris wheel, but when he reaches the top Crow takes a dangerous fall to the Merry-go-round below. Amazingly, Crow is unharmed, and the two laugh off the night of horseplay.

The two then sit down to talk and make amends. Crow shows Seto his only clue of his past, a picture of himself with a man in what looks to be a laboratory. Seto asks Crow if he saw a silver-haired girl and is told that there's a particularly bratty girl in a nearby hotel, though Crow is unsure of her hair color. Crow then gives Seto a Skull Ring, to symbolize their newfound friendship. Then, thinking that it's what friends do, Crow gives Seto a kiss, shocking the boy, as it was Seto's first kiss. Crow and Seto split ways shortly after, resolved to reach their goals and see each other again in the future.

Whilst searching through the decaying Dam, Seto finds Crow in a room full of discarded robots. He confesses that he, too, is a robot, and being inhuman, cannot be Seto's friend. Seto tells him through tears that Crow is his best friend, even if he isn't human. Crow finally agrees, saying that the skull ring he gave Seto is a symbol of their friendship. Sadly, Crow is quickly losing power and he begins repeating himself much like Personal Frame did. Wrapped in Seto's arms, Crow passes away, thanking Seto for being his friend. Sai says that Crow stopped functioning, but Seto corrects her, saying that Crow died.

During the battle with Shin, Crow's voice (along other friends Seto has met) can be heard encouraging Seto for the final battle.

A closer view of the crow accessory on Crow's clothes.

Crow, with the locket, looking down at Seto

Developer art of a chibi Crow 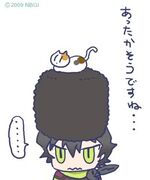 A chibi Crow with a different hat 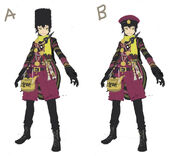 Early art of Crow featured him with a tall "Bearskin" hat