Sai (サイ) is a ghostly young woman Seto meets at the Kurato Hotel. She is tied to the events that lead to humanity's near-extinction.

Despite her youthful appearance, Sai is quite knowledgeable. From the Kurato Hotel to the dam, Sai knows all sorts of info about the enemies and locations she and Seto visit. She's able to point out a boss' weakness as well as provide insight into the Glass Cage Project and the mysterious Shin.

She loves cupcakes[1] and prefers blazers over sailor uniforms. She isn't sure what her blood type is, but knows it isn't B[2].

Sai is a playful spirit, mostly making idle chitchat when around Seto. She knows when to be serious, however, and worries about Seto even after giving him advice.

Sai was an average girl enjoying life when one day she was suddenly whisked off to a laboratory to be the catalyst for Glass Cage, someone whose body would link people's minds together. Painful experiments were performed on her, such as plugging cords into her head and making her take strange medicines, in preparation for the Glass Cage project. The painful experiments were so severe that it was the worst pain Sai felt her entire life. The only one who would be nice to her was the scientist Shin. He would thank her for putting up with the experiments, and sneak in chocolates and candies and show her affection when no one else would. Ultimately, however, Glass Cage lead to Sai's death, as well as most of humanity.

Postmortem, her ghost waited until Seto stepped into the hotel. She tried intimidating him, saying how the building was dangerous but that did little to stop him. Seto eventually gains entrance into the room Sai's body was locked in and meets with her spirit. It is possible that she might have survived the experiment and found her way to the Hotel. It is visually suggested (by the presence of a vial and syringe in her room) that she had recently died by suicide (possibly out of loneliness or regret) considering her body wasn't decomposed. After remarking that her body looked cold, Seto covers Sai's body with a bed sheet. They both leave the room, and Sai - having nothing better to do - decides to follow Seto around and gives him advice.

On the hotel roof, Seto and Sai discuss Seto's desire for companionship. Though skeptical, Sai agrees to go along with him.

At Tokyo Tower, Seto reveals that he wants to face Shin alone. To avoid injuring the silver-haired girl, he decides to leave her along with Sai to keep her company. Sai, who has come up the tower along with the silver-haired girl, told him that she loves him and that love is an emotion that can only be expressed though words. The two vanish together, after thanking Seto, who then collapses and weeps at the loss of yet another friend.

Sai has short dark hair (and an eyepatch, though it's not present in her concept art) covering one of her eyes and white bandages wrapped around her head held in place by bandage netting. She wears a rather small white top that shows her stomach and a red jacket with a sailor style collar over the top. She has a small pink pig attached to one of the jacket's arms and wears short denim shorts and tights. Interestingly she is covered in markings as if someone was going to operate on her, perhaps as a reference to her past as scientists performed "painful experiments" on her. She also has bandages on her legs, wrists, and around her neck and will sometimes comment through the Wii remote that "these bandages get so itchy!" She has blue eyes and has a beauty spot under her visible eye.

Sai appears in one of Seto's dreams as a fellow classmate in school. Many of the markings written on her skin are missing, and she is no longer wearing a sailor uniform. Instead, she's wearing a more traditional school uniform. However, she still has the same headwear and the small pig attached to her arm. She also has bandages on her legs and neck.

Sai as she appears in the manga 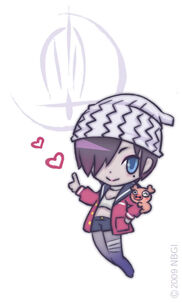 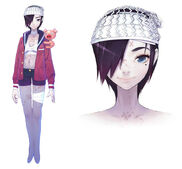