Shin (シン) is a mysterious man who was involved in the Glass Cage Project and is the main antagonist of Fragile Dreams: Farewell Ruins of the Moon. The extent of his involvement seems to have been kept under wraps.

Born on 10/04 (October 4th), Shin grew up to be a brilliant scientist. He discovered the secret to being able to expose people's emotions and, feeling it was only safe, secretly made himself the first test subject. The result was being able to see the emotions people hid behind their words directed at him: instead of respect and gratitude, all Shin found was contempt, scorn, and envy. This enraged him terribly.

After finding out about all the hate and resentment people had towards him, Shin became spiteful. He despised the world yet showed sympathy towards Sai, the designated catalyst for the Glass Cage project. It is only after nearly wiping out mankind and seeing the truth behind Sai's heartfelt words does he see the error of his ways and become more understanding.

Shin's attire is completely white. His coat, tie, gloves, pants, and sandals match up with his pale skin and white hair. His button-up shirt is an off-color white/green while his belt is black. His red eyes are seen clearly behind his glasses.

Shin is first heard over an intercom near the dam, ordering Ren to return to where she is needed. He stays behind the scenes, information about him being leaked by Sai to Seto. During the course of Sai's stay at the laboratory undergoing painful experiments to be the Glass Cage catalyst, he was the only one who would ask her how she was doing. He would also manage to sneak in candies for her.

Shin finally reveals himself once Seto and Sai have entered the facility in which experiments and preparations for Glass Cage were carried out. Floating in midair, he immediately asks her why she brought a human in to which she tries to reason with him to no avail. He leaves, fading out of the room in a teleport.

In a chamber containing the capsule Ren is trapped in, Shin awaits Sai and Seto. Above them is the crystallized form of the AI mainframe, an object that allows spirits such as Sai and Chiyo to exist, the Tracker declares the beginning of an age ruled by machine intellegence. He takes it and begins to combat Seto with lightning-based attacks. He underestimates the boy's resolve and retreats to the top of the Twilight Tower to unleash Glass Cage.

At the top he asks why Seto fights him and in return Seto asks why he insists on wiping out mankind. Shin explains how "communication through speech is meaningless". Seto can't understand this and they battle last time. At last, the lad exhausts all of his energy. Gasping for breath, Seto asks why Shin wants to destroy the world.

"It turned its back on me." Ren and Sai arrive in time to hear the explanation along with Seto. When Shin began the human empathy expansion project, he secretly made himself the first test subject, feeling it was his responsibility to carry the project out as safely as possible. He relied less on words and more on the exposed thoughts of others. As a result, he could hear their "jealousy and contempt". Everywhere he looked, he found hatred hidden beneath kind words. It was directed at everyone, but especially him.

"Whatever empathy may have been felt for others was quickly trampled by people's self-interest." Not even his parents loved him anymore. The world was tainted and needed to be wiped clean. He doesn't see why not.

Sai, in disbelief, confronts Shin. The mad scientist thought she sided with his ideas, that they could be in a new world as AIs. But no, that is not what she wanted. Not like that. "I just wanted to be near you. I needed to be a part of your life." She recalls times he comforted her in the lab even though she was scared. All the attention he gave her, the affection he showed her, she gives back with three simple words. Words Shin thought were worthless. He wonders why he couldn't sense that emotion, that true and pure emotion of love. The truth was, guesses Sai, when it came to important things, they had to be put into words.

The crystallized form of the AI mainframe is tossed off the side of the tower. As the Tracker chastizes him for choosing love, Shin explains that he and Sai will soon disappear and Glass Cage will never be activated again. Thanking Seto, they fade away in a glowing sphere of golden light. 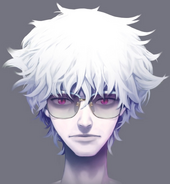